Ah yes, Dad was spicing things up in the kitchen.

The pot roast eventually made it into the slow cooker with all the right ingredients on it.  Mom and I had a short back-and-forth about whether the slow cooker was working because the light wasn’t on.  We solved the problem when we discovered that the slow cooker did not actually have a light to be turned on.

Dad chose to leave the kitchen around this time.

Mom said, for roast beef dinners, you stagger your preparation and then there is a flurry of activity when everything is ready and you have to get all the hot dishes onto the table quickly.  In hindsight, she was warning me to pace and prepare myself.

In this lull, before we tackled veggies and potatoes, why not bake cookies?

“Don’t worry, these are semi-homemade,” she said.

Semi-homemade is a word Mom adopted into her vocabulary after picking up a magazine of the same title, which teaches you how to incorporate prepared foods into your meal.  The magazine, just by existing, offloads a world of guilt for those who do not have the time or capacity to cook from scratch regularly.  Permission has been granted, we can bake cookies from a mix. 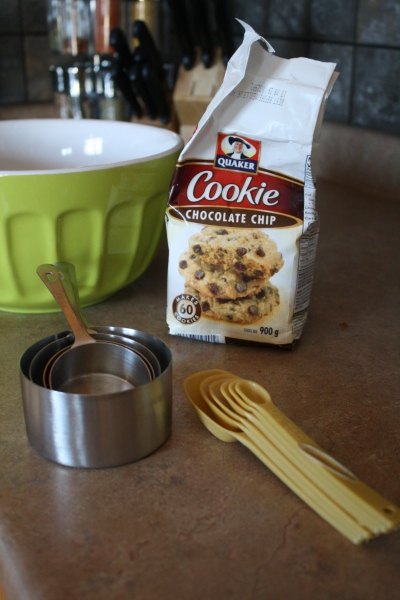 Once I combined cookie mix, eggs and water in a bowl, the hardest part of the whole process was the elbow grease needed to stir the ingredients, and getting the dollops of batter evenly sized on the baking pan.

“That’s OK,” Mom said, “Sometimes it’s nice to make different sized cookies.”  As a young girl, she would purposely make bigger cookies for her dad/my grandpa, now deceased, when she and her family lived on the farm.  “I took cookies to my Dad and my brothers. I made a big one for my dad.  I usually took something to them when they were working in the fields, with a big jug of water.  I remember one time, it was so hot out, he poured the water all over his head.”

Our family likes to tease Mom because there have been many, many, many… times over the years that the fire alarm has gone off while she was cooking.  It has warranted a lot of jokes and whimsical kitchen paraphernalia, like this magnet she keeps on her range hood.

But Mom denies that it’s a regular occurrence, albeit without conviction.  I ask Dad to back me up, but he’s a diplomat, “Well, it goes off less than it used to.” Why, then, I wonder, does she keep a fan, perfect for quickly quieting the fire alarm, in an easily accessible place in her kitchen. 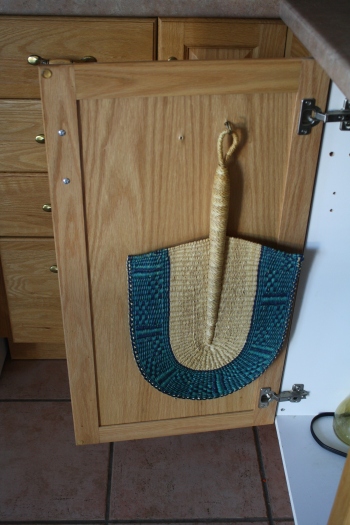 I sometimes tell John-Mark when he’s cooking to add a little char to my meat – just like Mom makes.  But to be fair, I have had a few of her dishes that were especially delicious… and the fire alarm does go off less than it used to, ever since she got into making salads.

I ask Mom to tell me about some of the memorable meals she’s made over the years that didn’t involve a smoking stove.

“I made a Tuscan turkey dinner with Italian bacon one year that everyone loved.  I got it out of a Martha Stewart magazine.  I remember everyone loving it.  I put a lot of preparation into it.  It was delectable to taste.  Everybody commented on it.  There was a sense of satisfaction about the meal, that more than our hunger was satisfied that evening.”

Mom also remembers it was difficult to cook well when her children were young.  (I personally thought for the longest time that Kraft Dinner was supposed to have big, dry cheesy chunks in it).  But there were times when she liked to put in the extra effort.

“When you kids were young, we didn’t have a lot of money to spend on babysitters and going out.  I would make dinner for you four first and put you to bed.  Then I would make a steak and candlelight dinner for your Dad.  I’d set up a card table in the living room, put a table cloth on it, put out the china.  I even got dressed up.  It was a nice, romantic dinner.  I looked forward to those moments.”

Although I’ve been in it hundreds of times, I got to know Mom a little better through her kitchen during the lesson.

Mom’s kitchen is fairly tradish. She talks about changing the stain or handles on the cupboards or the paint on the walls, but generally she is happy with the layout and decor.  She has enough cupboard space and her counter tops are uncluttered.  She has a few things on them that are both useful and beautiful.

But the real treasures are found inside the cupboards.  Mom has some beautiful dishes, some pottery which she has collected or made herself, lots of china, and some eclectic pieces.

“My father gave this jelly jar as a gift to my Grandmother when he was young.  It was probably cheap since he bought it as a boy. I liked to serve him black berry jelly in that jar when he would come to visit.” 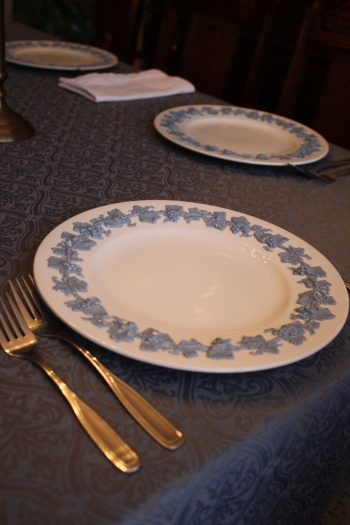 “This was my mother’s good Wedgewood china.  We brought this out every Sunday when we had guests over for lunch after church.” 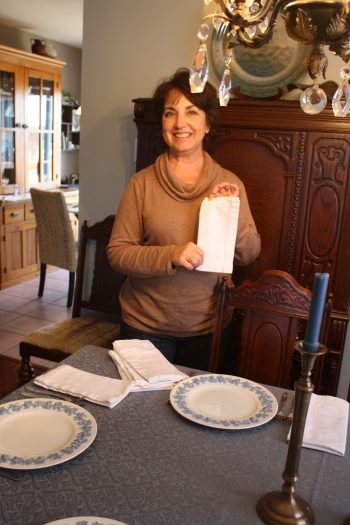 “These are the serviettes your brother bought me for Christmas.  They were ordered from the States and he had to make a special trip to pick them up.”

“This is a tea cup from the Royal Airforce, which your Grandfather served in.”

But besides these treasures, what captivated me was how everything has a place in Mom’s kitchen.  She finds homes for her things.  They look and feel cared for.

While I marvel at her organization, I wonder if it takes a special person to keep a kitchen like this.  I figure that keeping my things in cupboards and drawers is enough, but for Mom it matters how they are arranged even behind closed doors.

I draw the line at labelling the inside of my drawers.

After our short, but revealing exploration, we pull out the semi-homemade cookies – baked to PERFECTION.  Now we have something to snack on while we make the piece de resistance, the famous rosemary potatoes.  My turn to reminisce; these have been my favourite since I was a child.

Mom said to start by washing the potatoes and then cutting them into bite size chunks.  I can do this. 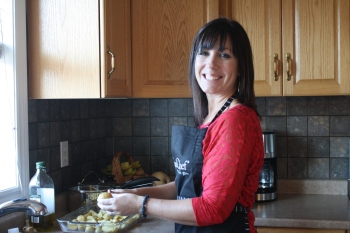 The next steps involve coating the potatoes with oil and spices.  However, there was some household debate as to whether you put the oil and spices in the bottom of the pan and then toss and turn the potatoes in them (Mom’s way) or coat the potatoes top down (Dad’s way).  Since Mom was the teacher, we did it her way.

To the bottom of the pan we added:

Coat the potatoes in the pan, put in the oven at 400° for one hour.

Mom says you can remember to put them in at 400° because of Highway 400.  “It’s the highway to good potatoes!”

The rest of our time was spent chopping veggies – carrots into coin shapes and broccoli into little trees – warming bread, getting out little extras, like pickles, hot peppers, condiments, all with special dainty dishes that had a story behind them.  We set the table properly.

At this point I should tell you that Mom used to teach an etiquette course when I was a girl.  Young ladies would learn things like how to sit with a skirt on, pose for photographs, do their hair in a way that flattered their face shape, introduce people to each other, and set a table. The importance of facing your knife the right way and putting your place setting a knuckle’s length from the edge of the table was instilled in me at a young age.

For special dinners, like my birthday meal, there is no from-stove-to-table convenience.  She takes pleasure and finds beauty in the details, thinking about how things will look and what others would like.

Soon the timer went off and the cyclonic activity began.  We worked furiously to get the various pieces into their patiently waiting serving dishes.  It’s a bit of a blur, but I might have been stirring the gravy (I’ll need another lesson on this, I wasn’t paying attention) while pouring drinks into glasses, all the while wondering why people couldn’t pour their own drinks.

What I found interesting was in fray of putting the food on the table, Mom didn’t once taste what we were about to serve.  Isn’t this a given when cooking?  I couldn’t resist the perfectly crisp edges of one tasty potato morsel.  I dipped it in the gravy,  “Mmmm, Mmmm, Mmmm!” I said.

“Did you hear that, John?” Mom chimed up, “Lori must be Italian like you!  She tasted the food before it went on the table!”

Because it was my birthday, my family joined Mom and Dad at the table.  After giving grace, we dived into the food (success thus far is when those eating it can’t tell I made it).   I might have had three helpings of the potatoes.  I figured I’d worked off enough calories by passing all those pickle dishes ’round the table.

When I had a moment to reflect on our afternoon and the product of our efforts, I realized the details did matter to me.  Happy conversation was better because it was in the candlelight.  It added a richness to enjoy my favourite potatoes on my grandmother’s Wedgewood.  We had a laugh at the silver salt and pepper shakers that belonged to my great grandma, my dad remarking that they’d be even more beautiful if the salt actually came out of them.  The crystal stemware and fancy linens all communicated a message of love in a way that words can’t always achieve. There was that sense of contentment, that more than our hunger was satisfied. A beautiful birthday gift from my mom.